“Say yes to the dress” is now a famous phrase thanks to TLC’s reality show on purchasing your dream wedding gown.

With  eight months until I tie knot, and having been engaged for more than a year already, I found myself on that endless Internet search of white lace and tulle. I made up my mind a long time ago that I would go to two stores – three maximum, if needed.

I first visited the new Kleinfeld Hudson’s Bay in downtown Toronto. They have a very wide variety of dresses and the store is airy and gorgeous, just how you’d imagine it to be. My family and I had a wonderful experience with our consultant, and I almost – almost bought a gown. However, my consultant suggested I take some time to think about it as it was my very first time ever trying on and shopping for a wedding gown.

The dress I almost bought at Kleinfeld Hudson’s Bay. No, the one I actually bought doesn’t look like this at all.

Two weeks later, I find myself at a David’s Bridal, again, treated so very well by our consultant and  assistant manager of the store.

After nine dresses at Kleinfeld and four at David’s Bridal, I found it.

There are no mirrors inside the change room at David’s, so my first judgment was simply looking down at it, and I liked what I saw. The second judgement, the reaction of my family members that I brought (all of whom have very varying tastes, and none of whom were in favour of one of the earlier dresses I tried on and liked very much). They all gasped, they all loved it.

Finally, I got to see myself in the mirror, it had all these little details I wasn’t expecting. The shape was what I wanted and it reminded me a lot of a custom dress I’d seen on Pinterest (which is evil, by the way for bringing up dressed so out of my reach) and fell in love with.

I’d made my decision, this was it. I didn’t want to try on anymore. 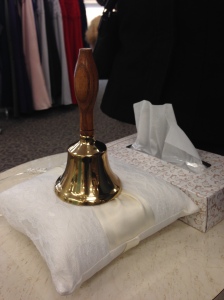 At David’s Bridal, they have a tradition where the bride rings a bell and makes a wedding wish after finding her dress.

I bought an Oleg Cassini, the dress is discontinued so I bought the sample dress, which made it half my budget (before alterations, and yes, taxes)

Problem? There shouldn’t be right? I only went to two stores, tried on about a dozen dresses and saved my family a lot of money and time, unlike those bridezillas or indecisive fiancées on TV.

No, my problem now is buyer’s remorse. Kind of the way I felt after I’d bought my car (also white by the way).

Is this really the dress? Should I have tried on that first dress I really l liked one more time? Will I still like it in a year? Is this what my fiancé pictured me in?

I go back to a very distant ‘important’ dress in my life – prom. I loved it at the time, but regretted that it was too sweet, too pretty, basically not sexy. Now, I’m not saying I’m trying to ratchet it up for my wedding, but I did want something sophisticated-sexy let’s call it. And now looking at photos of my dress, I don’t know.

Am I overthinking? Yes, I have been told.

Is it a pretty dress? Yes, I have been told that too.

Do I look pretty in it? Yes, it’s how I’ve been described.

Did I just fuck up again?

One thing I like about it the most, without giving too much away, are that the features are different. It hugs my body, which will be in much better shape by the time I walk down the aisle. And hey, it’s got some bling.

Perhaps writing my fears out has been cathartic, because I don’t feel as bad. I do not regret purchasing this dress in anyway. It’s so weird though, the only person’s opinion who really matters is the man I am wearing it for.  I’ve even considered showing him a photo of it, just so I can get his reaction to it, but rationale slowed my roll there.

It is so cliché, but my fiancé really is my best friend. He’s also not the type of man to abhor shopping, so it’s common place for us to weigh in on each other’s outfits and style, knowing that he likes the dress would silence all this doubt.

Like a good friend, he gave me some pretty good assurance; that he was sure I would wow him in this dress, and that I could show up in sweatpants and he’d still marry me.