In true #TBT fashion, we’ll be throwing it back to long-lost stories. The ones in which we did put pen to paper (in a 2017 kind of way), but for whatever reason remained tucked away in the unpublished folder.

Why we didn’t publish: No good reason at all. That’s the truth.

I heard this said twice (both by males) on my Bachelorette party in Montreal.

Myself, my sister aka Maid of Honour, three cousins, my future sister-in-law and my three best girls (Stef included) hopped on a plane for the short flight to Montreal, for a weekend of debauchery and messiness.

It probably didn’t “look” like a Bachelorette party because it wasn’t full of debauchery, it also didn’t include sashes, any pink whatsoever, a tiara or penis straw – though this was discussed.

I will admit there was a little bit of messiness – hey, good jams and alcohol might do that to a girl – but not this bride.

I rarely drink. Before we left, my fiance made it a point to tell my sister, cousins and friends that he wanted pictures of me “praying to the toilet”. I feared he would get his wish, as it was a few people’s goals to get me crunk.

While I enjoyed a happy state or tipsiness, perhaps even drunkenness as I apparently gave out a whole lot of money at the club that I only recalled the day after, I am proud to say this alcohol lightweight held her own.

There was also one (or two, depending how you look at it) penises involved. Let me explain… 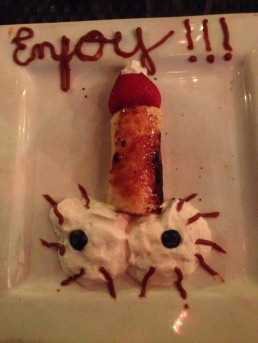 On our last night we enjoyed a delicious dinner at an Argentinian steakhouse after an afternoon at the Bota Bota spa (which is so awesome by the way after a night of partying). Our waiter was a charismatic frenchman, who was tipped off that the reason for our big dinner was my upcoming nuptials. I was in the bathroom.

He later served me dessert shaped like – you guessed it – a penis, complete with sparklers, the word “Enjoy!” and no fork or spoon.

“You have to eat it off the plate like that,” he said.

I absolutely did not and used the teaspoon he gave me earlier with my tea. Ha ha.

All in all it was an amazing weekend with a bunch of young women that I adore and respect. My little sister took care of me in the sense that I didn’t pay for any of my meals except that one she missed because she was praying to the toilet (BIG SMIRK HERE) and I felt both proud and ashamed. Proud, that my sister (six years my junior) is a registered nurse, making RN money, but also helping those who need her skills. Ashamed because, she’s six years younger and I am more used to paying for almost anything she needed up until she started working.

I am grateful though for her, and I can’t even bring myself to finish my speech about her that I plan to say at the wedding because I bawl my eyes out every time I try to write.

Rosalyn with her sister and cousins.

I am grateful for my cousins who I grew up with, I’m the first one of our little blood crew to take this step, and while we’re all quite different, when it matters we’ve got each other’s backs always.

I am grateful for my friends who came. I met Stefania and my two other girlfriends a bit later in life, but at the right time. As that old adage goes, if you want to know who someone is, look at their friends. If you look at mine you’ll see smart, hard-working, funny, beautiful, charismatic women who make me strive to be better everyday.

So, while it may not have looked like a bachelorette party on the outside, it definitely was a celebration, not to necessarily bid adieu to singledom but to embrace the growth that is to come on the road ahead and strengthen the female bonds I have now.